Nate Silver and his band of merry nerds over at FiveThirtyEight.com have decided!  Taqueria Cancun’s al pastor super burrito is truly dominant.  Check the press…

Taqueria Cancún is the unassuming neighbor of the more glamorous Mission Street members of the Burrito Bracket. Don’t get me wrong, it has a large, loyal following and has received its share of accolades over the years, but the long lines are never quite out the door, and the peaceful dinginess inside makes you feel more at home than you might at El Farolito or La Taqueria. Paper cutouts dangling from the ceiling, bright yellow walls and stained terra cotta tile also make a daytime visit feel like you’ve stumbled upon the aftermath of a raging party.

Read the rest of the post, but it’s a feather in the cap for a uHood stalwart.  And take that, El Farolito!  Just jokes. The truth is that the uHood loves all of its charming taquerias.

As you may have noticed, construction started on the new St. Luke’s hospital early this summer. They are currently working on “make-ready” projects, such as fixing water, sewer, and electrical lines under Guerrero, Cesar Chavez, 26th, and San Jose but are scheduled to start full construction in October.

As an example, here is the construction activity summary for this week:

You can also sign up for email notifications, which is nice because they will let you know about weekend and/or early (before 7am) construction:

Out of service until THE END OF TIME!

I always remarked to myself how there seems to be zero progress being made on fixing the 24th St Bart station SW corner escalator. I see I’m not the only one who thinks so… What’s wrong with this country?

I was parking in Sunset on Sunday and couldn’t figure out why the meter said “Free Parking.” Now if only they’d refund my Sunday parking ticket from January last year when I got busted parking on a Sunday not knowing they started charging.. (Bastards.) I never could understand the logic that by charging for parking on Sundays, it would improve stores’ business, which is what they were claiming earlier…

Thanks to the Fixed app blog. 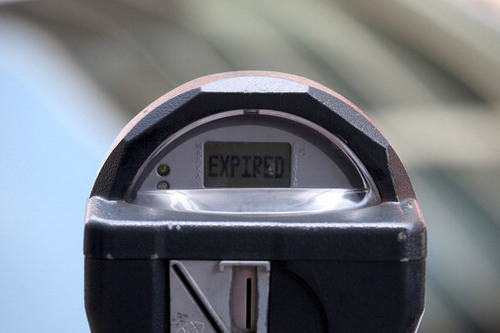 As much as I believe microhoodsf.com is the pinnacle of uHood news …  we do have to admit that Mission Mission may have a slightly bigger following.  And our very own uHood alum made the big time Mission news.  While the circumstances could have been more joyful – we are proud to have a picture of our very own Niall shedding a tear in his beer at Rosamunde.  Credit to Juila on the ID!

Nathan Silver and fivethrityeight.com are going in search of America’s best burrito.  And the uHood is well represented with El Farolito, La Taqueria, and Taqueria Cancun included in the bracket.

You can examine their methodology here:  http://fivethirtyeight.com/features/in-search-of-americas-best-burrito/

The saddest thing about Prop B isn’t that it took just 15% of registered San Francisco voters to approve this city-changing referendum. Or that the Pier 70 development is now in danger of not getting built. Rather it’s that Pier 70 and other waterfront parcels will inevitably get developed, but they will take longer, cost more and not be as good — by any measure — because of this entire atrocious process.

All so a tiny fraction of San Francisco’s wealthiest and best connected can try to play god with a city they are too scared to see change.

Even if you support the legislation, the process stinks.

Unbeknownst to an astounding number of San Franciscans, the destiny of perhaps the city’s most iconic feature was up for vote this past Tuesday. At issue was real estate development along the waterfront, specifically involving land managed by the Port of San Francisco.

Prop B sought to force real estate developers to put their project up for voter approval if they wished build higher than zoning allowed. Along some parts of the waterfront height limits are zero — not unreasonable given the sensitivity of our bay-front land. But height exceptions for new construction are not uncommon, as they often make room for more dynamic projects and more space for affordable housing.

Opponents of the proposition argued that the inevitable delays, costs and unknown risks of having to get voter approval for a specific project would make development along the waterfront economically impractical.

In other words, Prop B’s well-heeled proponents got exactly what they wanted.

Prop B was advanced by some of the same folks who made history last year by quashing the 8 Washington development, the first ever city-wide referendum on a single real estate project. A whopping 27% of voters found their way to the polls last November to crush 8 Washington, emboldening the small group of San Francisco residents who believe their wealth entitles them to control some of the city’s most valuable resources.

And while I may be angry that Prop B passed, I’m angrier at how it all went down: Fewer than 60,000 people making such an important decision in a city of over 800,000 isn’t democracy.

It’s no accident that Prop B was sneaked onto the June ballot. Mid-year elections have notoriously low turnout, and those few who do vote have historically been whiter and wealthier than San Francisco as a whole.

Prop B supporters are a who’s who list of neighborhood groups that are firmly anti-growth. Veiled in a thin film of populism, entrenched interests in Telegraph Hill, Russian Hill, Potrero Hill and other affluent neighborhoods are constantly fighting to bolster their already high property values by blocking developments that would add housing stock to the city. These are people who see no inherent hypocrisy in fighting both the construction of new housing and the high cost of living in the city.

Meanwhile, San Francisco remains mired in an affordability crisis, one that could be alleviated if it were easier to build taller, denser buildings.

And it’s like not getting a development approved was easy before Prop B. San Francisco is notorious for having one of the most challenging development approval processes in the world. It takes years for even a compliant project to get the green light, let alone one looking for a variance. Neighborhood reviews and other bureaucratic morass run rampant across the city in the name of a noble goal that has been vastly perverted: maintaining the cultural and aesthetic quality that makes San Francisco the magnetic city it (still) is.

There’s blame to go around aplenty, but I keep coming back to the city itself. How can politicians sit idly by with such pathetic voter turnout — especially when we are one of the only places in the world where city-wide referendums even exist? If and when there is no city-sponsored “get the vote out” campaign this November, we’ll have all the proof we need that the city endorses a small affluent group mapping out San Francisco’s future.

Actual political engagement in this city is a joke. We are long lip service, protester-hooligans and fear-mongering NIMBYism. We are short courage and actual dedication to effecting positive change. I’ll be the first to admit I did nothing to stop Prop B from passing this week. I’ve never gotten involved in the political process, but after this abomination I’ll be damned if I sit around and let a privileged few keep screwing up our city.

(What’s that? You’ve never heard of the Port of San Francisco? For an education on the Port and the city’s long history of dysfunctional politics, check out A Negotiated Waterfront by Jasper Rubin. Fascinating read on the twisted web of real estate developers, neighborhood groups, environmentalists and the city’s politically powerful stretching back to the 1860’s when the Port was so corrupt that the State had to step in and seize control … control it finally relinquished in 1968.)

Just a few links about SF which I found interesting! (This blog needs more traffic!!)

25 Things You Learn Your First Year in San Francisco
http://www.thebolditalic.com/articles/5124-25-things-you-learn-your-first-year-in-san-francisco

I saw this flyer right outside of Clooney’s on my walk to work a couple of weeks ago.  I had to take a photo.

My initial thoughts were, geez, that dude’s opening himself up to whole world of trouble.  Good thing he included a douchey Gmail address and not a phone number.   That inbox will be full of hate faster than the vagrants at 24th & Mission can pop the top on a 40 of Mickey’s.  The flyer wasn’t up for long.  Oddly enough someone tore off one of the contact strips.  Weird.

But as the past couple of weeks have elapsed I’ve come to reconsider this neighborhood anomaly.  I smell a troll.  Maybe it’s the umbrella, orange wedge and cherry-adorned cocktail so delicately balanced in his left hand.  Maybe it’s the come-hither gaze framed by lank, vaguely-greasy-looking hair and the oh-my-god-you-can’t-fucking-ignore-it white plastic and aluminum Google Glasses.  Whatever.  The whole thing screams troll to me now.

Say, it’s nearly 3pm on a Saturday right now.  I wonder if he’s meandering near Zeitgeist this very instant.  I hear they LOVE glassholes at Zeitgeist.

Without fanfare our stalwart uHood dive bar has sadly closed its doors.  How I wish I could have gotten one more pint of cheap ass margarita or mojito?  Or even just a Racer IPA?  Or a few more goldfish for that bit of cracker sustenance?  Exactly what is needed when you approach your fourth round of pints of liquor at happy hour prices.  How I remember rushing to get to happy hour for the $4 margaritas . ..  only to learn that happy hour prices were just $1 less than the normal prices.

The Attic – I wish your farewell!!

In what may be a bit of solace – the owner of The Attic is opening a new place called Gashead Tavern in the former Charanga spot on Mission St.  But somehow a restaurant that serves actual food, has working lights, and may occasionally mop the floor just will never be able to replace The Attic.